Author’s Update: This article was originally published on December 15, 2017. Preliminary data presented since at the 2019 Annual International Cannabinoid Research (ICRS) featured new developments in CBD science that have far-reaching implications for many areas of medicine.

Specifically, findings suggest that the use of a custom-formulated, whole plant-derived high CBD sublingual tincture results in less severe anxiety and was associated with less anxiety-related symptoms. Click To Tweet

At the Veterinary Information Network (VIN) in 2019 a survey to gauge US veterinarians’ knowledge level, views and experiences related to the use of cannabinoids in the medical treatment of dogs found that most vets agreed that hemp derived CBD products offer benefits for humans and expressed support for use of CBD products for companion animals.

How To Help A Dog With Separation Anxiety?

There are many prescriptions and over-the-counter medications available for anxiety-related disorders, but many pet parents are tired of synthetic chemical medications and are wanting a more natural, organic remedy to help soothe and calm their four-legged friends.

Dogs are pack animals & when they can’t be with you they show signs of Separation Anxiety.

Cannabidiol (CBD), a Cannabis sativa constituent, is a pharmacologically wide-spectrum phytonutrient that in recent years has drawn increasing interest as a treatment for a wide range of human neuro-psychiatric disorders.

Not surprising, CBD for dogs has also been getting a lot of attention lately because it may provide some of the same interesting therapeutic effects for pets suffering from behavioral issues like social interaction disorders, depression and separation anxiety.

CBD is a natural treatment alternative for dogs with Canine Anxiety Disorder but without dangerous, addictive side-effects and is perhaps the most promising dietary supplement for overall canine health to come out in the last 50 years.

Numerous studies and an accumulating body of potential evidence from clinical experiments show that CBD has strong anxiolytic (anti-anxiety) properties and is well-tolerated by dogs with symptoms of severe anxiety disorders.

Even though Cannabidiol has not been medically proven to be a cure or treatment for anxiety associated disorders, dog owners are still wantonly giving their pets CBD based products in hopes that it will relieve their dog’s high-anxiety panic symptoms & stress reactions, often with dramatic improvements using only small, incremental doses.

Several studies have been conducted that establish the efficacy of CBD in improving the destructive behaviors of canine separation anxiety disorder.

Separation anxiety in dogs is a condition in which a dog exhibits distress and recurrent behavior problems in the absence or perceived absence of an attachment figure. An attachment figure could be its guardian, another human, or another animal.

Separation anxiety is the second most common behavior problem of canines affecting an estimated 14% to 40% of dogs. In addition to separation anxiety, these pets may have other panic disorders or phobias including nighttime panic, and phobias to thunderstorms or loud noises like exploding fireworks. 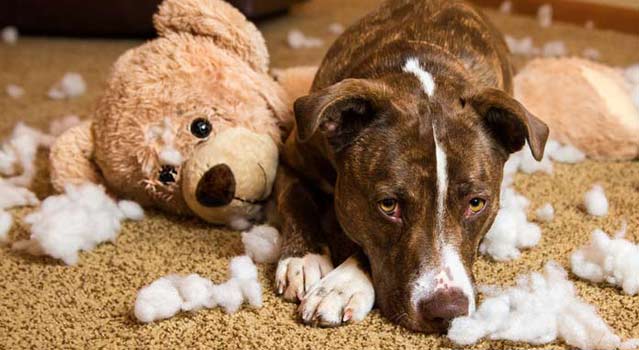 Symptoms Of Dogs With Anxiety

Mixed breeds may be more prone to separation anxiety than purebred dogs and male dogs may be at higher risk than females.

Though the exact cause of canine separation anxiety is not known, negative behaviors can be triggered or amplified in dogs by: a change in care or routine, by a traumatic life event like the loss of a pack family member (or a recent addition) or from a major life change like moving to a new home or abandonment to a shelter.

Separation anxiety behavior may also be due to a secondary underlying medical condition or accrue from repeated external stress that can cause lasting impairments to a dog’s physiological health. Over time, increased stress in a dog alters their endocrine hormone levels and thus decreases their immunity to various inflammatory based health problems.

What is clear is that anxious canine behaviors are not the result of disobedience or spite. Your dog displays anxious behaviors when left alone because he’s upset and trying to cope with and adapt to a great deal of stress!

This is where full spectrum hemp CBD oil can be very helpful for anxious dogs. 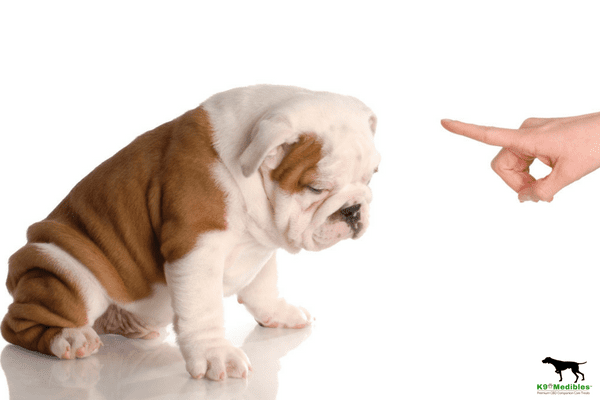 Punishing a dog for wanting to feel better about his stress does not improve his behavior.

CBD for dogs can be a great therapeutic aid for separation anxiety and a natural alternative to the currently available pharmaceuticals especially when starting at low doses and working one’s way up to using higher amounts.

How CBD Works For Dogs With Separation Anxiety

CBD oil helps dogs with anxiety in two noticeable ways. First, at the cellular level, the Endocannabinoid System (ECS), comprised of the cannabinoid receptors CB1 and CB2, are widely distributed throughout the dog brain and modulates functions such as eating, sleeping, pain reception and mood. The activity of the ECS can be modified with exogenous CBD thus mediating the dog’s initial, acute ‘panic-reflex’ so he doesn’t progress into more negative behaviors.

CBD works by exerting several actions on a dog’s brain. CBD acts similar to a class of prescription anti-depressants, known as Selective Serotonin Reuptake Inhibitors (SSRI), by boosting nerve impulse signaling via serotonin receptors. In fact, some studies have shown that CBD can enhance the transmission effect on serotonin receptors faster than those of SSRI’s.

Second, and more broadly, CBD can help with ‘oxidative stress’ levels that may play a role in pre-determining those dogs that may be at risk for anxiety disorders. CBD’s primary action is as an anti-inflammatory, neuro-protectant (US Patent #6630507- Cannabinoids as neuroprotectants).

A study conducted in 2016 used primary metabolite profiling to identify possible biomarkers for anxiety-related behavior. Results identified changes in thirteen metabolites between dogs who had separation anxiety and those who did not; these changes included differences in metobolites which control lipid metabolism and oxidative stress responses.

Researchers were able to come to the conclusion that biomarkers such as primary metabolites play a prominent role in canine anxiety. CBD can help balance these basic metabolite by-products coming from repeated stress encounters, thereby controlling the over-all inflammatory effect on canine homeostasis, essentially calming the storm before it starts. 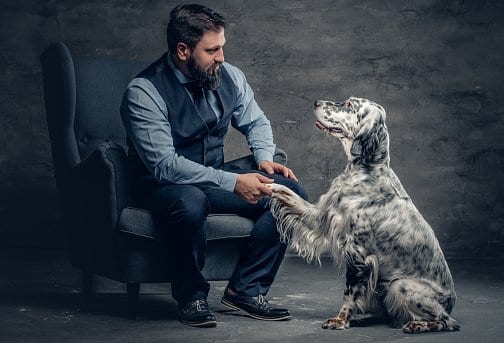 CBD is helpful in relieving panic attacks, mitigating mood swings, and quelling feelings of agitation, irritability, and sadness in dogs.

Separation anxiety is a serious affliction that has potential to affect any dog and commonly results in destructive or otherwise inappropriate behavior. The goal of treatment is to help the animal feel comfortable when left alone and feel less panic related in the absence of the “attachment figure”.

The precise mechanisms involved in its anxiolytic action remain to be determined but since Cannabidiol is from an organic, plant based phytonutrient with zero harmful side effects we can assume that supplementing your dog’s diet with CBD is safer than synthetic, prescription medications for anxiety-related canine disorders.

As mentioned earlier, clinical trials of this medication are still in their preliminary phases. However, considering the potential role that CBD can play as a natural therapeutic aid for canine anxiety-related disorders, CBD may eventually become the safer, more favorable first choice for treating your dog’s separation anxiety. 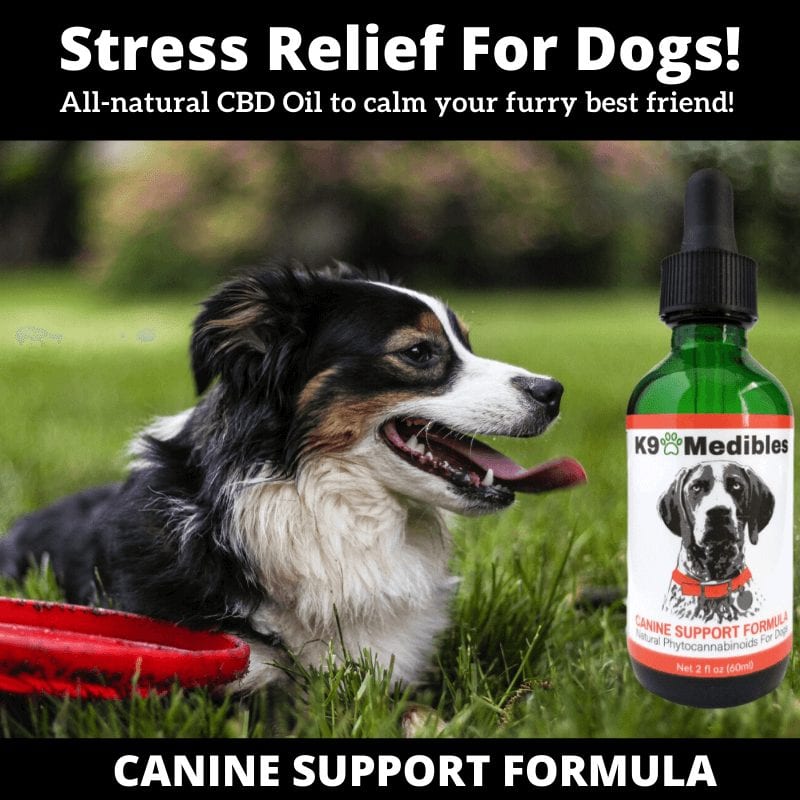 For dogs that exhibit anxiety based OCD behaviors, CBD offers a natural therapy that can calm your dogs stress and help balance serotonin level to calm your pet naturally.

In addition to specifically addressing the separation anxiety by supplementing with CBD, the general well-being of your pet must be optimized by ensuring adequate exercise and intellectual stimulation (e.g. food puzzle toys).

Some pets may be more comfortable if a pet sitter is an option or in doggie daycare for working pet parents. Ancillary treatments such as pressure wraps can also be used in conjunction with CBD for a safe means to modify restless, destructive behaviors.

Remember, all dogs need attention, affection and stimulation to thrive; but if you’re curious about the efficacy of this medication as a treatment alternative, your best option is to simply try it! 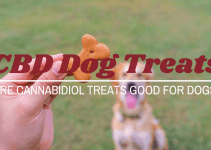