The sad truth is dogs age much faster than humans. But if you have a dog and ever wondered how old they are in human years it’s likely you’ve heard the rule-of-7.

The Rule of Seven says that a single human year equals 7 years for your dog. Turns out, however, the math isn’t that simple.

Dogs mature more quickly in their early years than humans do in their early growth stages. So for the first year of your furry friend’s life is equal to about fifteen human years.

Size and breed also play a role in a dog’s physical age. Smaller dogs tend to live longer than larger ones, but they may mature more quickly in the first few years of life.

A huge pup might age more slowly at first, but be nearing adult “middle age” at only 5 years old. Tiny and toy breeds don’t become “seniors” until around age 10; while medium-sized pooches are somewhere in the middle on both counts. 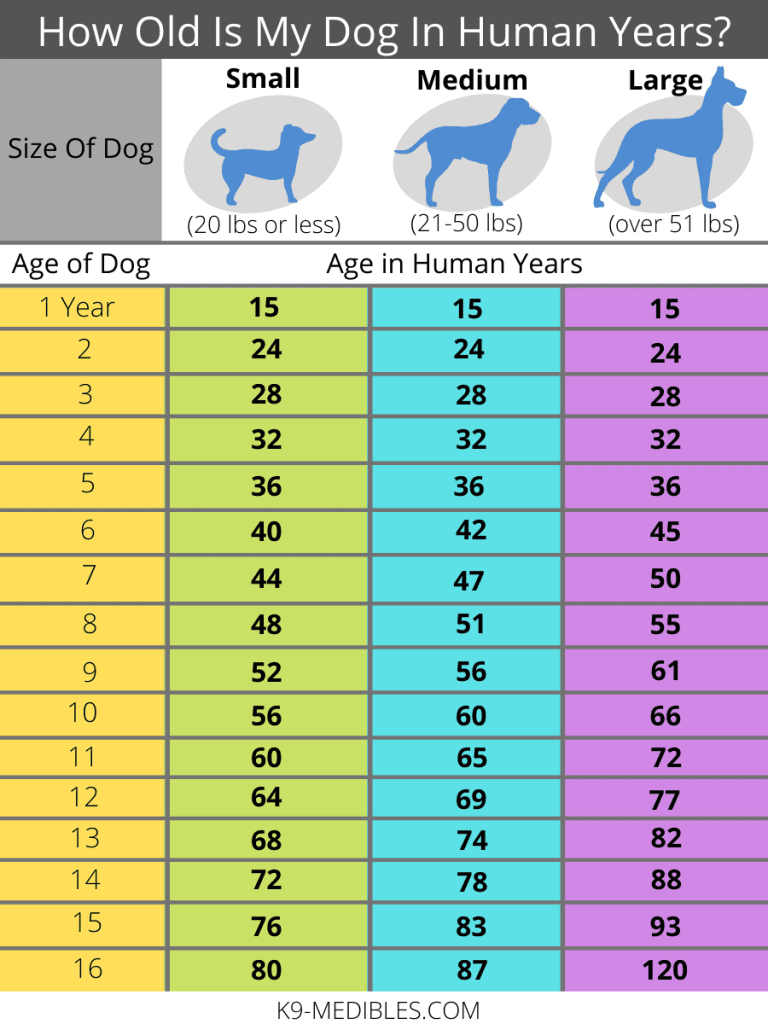 How To Calculate Dog Age

All dogs—no matter the breed—follow a similar developmental trajectory, reaching puberty around 10 months and dying before age 20.

During their lives certain factors other than size, like genetics, diet and disease, can play a significant role in contributing to the aging process for canines.

Because dogs mature at different rates when compared to humans, during the first two years of life, dogs mature rapidly from childhood to adulthood.

Typically, dogs will have an equivalent age of approximately fifteen years at one calendar year. At two calendar years, dog will have aged to twenty-four human years. After two years, a canine will age three to five dog years per calendar year.

It’s important to remember that the conversion for dog years to human years is directly based on human life expectancy which has a wide range.

But now, researchers say they have a new formula to convert dog years to human years—one with some actual science behind it.

Aging Research: What Is The Epigentic Clock?

A new concept in aging research is beginning to show that chemical modifications or changes to a person’s DNA over a lifetime create what is known as an epigenetic clock.

Scientists have built a case that one such genetic modification (the addition of methyl groups to specific DNA sequences), can track human biological age—that is, the sum toll that disease, poor lifestyle, and genetics take on our bodies.

As a result, some scientific groups have converted a person’s ‘DNA methylation status’ to an age estimate—or even a prediction of life expectancy. Other species (mice, chimpanzees, wolves and dogs) also undergo DNA methylation as they age and all seem to have epigenetic clocks that are influenced by their environments.

Even though man’s best friends diverged from humans early in mammalian evolution, they’re a good group for comparison because they live in the same environments and many receive similar healthcare and hospital treatments as their human counterparts.

To find out how those clocks differ from the human version, geneticist Trey Ideker of the University of California, San Diego, and colleagues started with dogs. 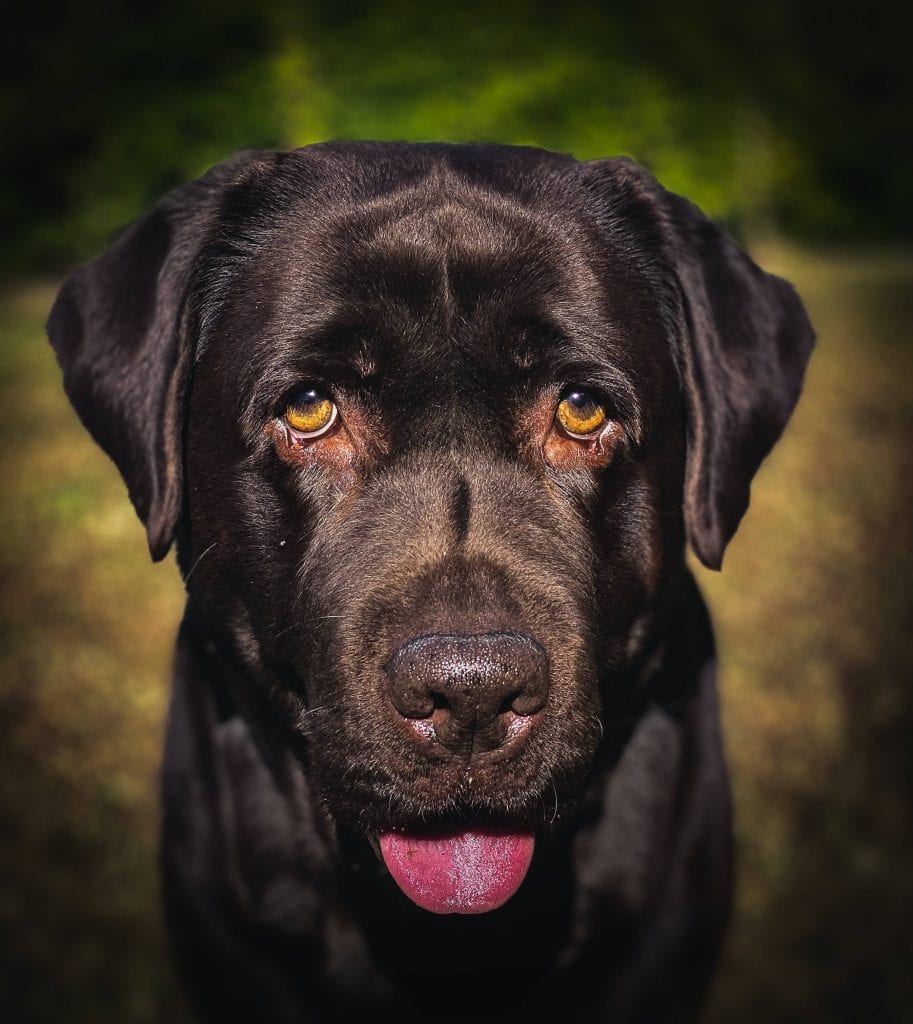 The conversion for dog years to human years was studied using Labrador retrievers.

A Better Way To Convert Dog Years To Human Years

The research on aging at UCSD attempted to determine the genetic factors that govern the ‘biological clock’ in dogs just as in humans.

They focused on a single breed, Labrador Retrievers, to find genetic factors associated with biochemistry of canine aging.

They scanned DNA methylation patterns in the genomes of 104 dogs, ranging from 4 weeks to 16 years of age. Their analysis revealed that dogs (at least Labrador retrievers) and humans do have similar age-related methylation of certain genomic regions with high mutation rates; those similarities were most apparent when the scientists looked at young dogs and young humans or old dogs and old humans.

Most importantly, they found that certain groups of genes involved in development are similarly methylated during aging in both dogs and human species.

That suggests at least some aspects of aging are a continuation of development rather than a distinct process—and that at least some of these changes are evolutionarily passed-on in mammals.

Their findings support the idea that dogs get the same diseases and functional declines of aging that humans do; and their work provides evidence that similar molecular changes are also occurring during the development (aging) process for dogs and humans.

The research team also used the rate of the methylation changes in dogs to match it to the human epigenetic clock, although the resulting dog age conversion is a bit more complex than “multiply by seven”, it does give a more rational, scientific basis for assigning canine age to your own family Fido.

Based on the methylation data study, dog’s and humans’ life stages of growth, development and decline seem to match up.

For example, a 7-week-old puppy would be equivalent roughly to a 9-month-old human baby, both of whom are just starting to sprout teeth. The formula also nicely matches up the average life span of Labrador retrievers (12 years) with the worldwide lifetime expectancy of humans (70 years).

It wouldn’t be surprising then that this formula shows that there’s a gradual increase in DNA methylation in both species with age but more results are needed to see if it can be applied to different life spans of other dog breeds.

Proving again we humans have a lot more in common with our K9 companions than just the simple joys of loyalty and companionship.

Now that you know your dog’s ‘biological age’, here are 5 tips to help your dog live longer:

Strong dogs stay young! There’s no set of guidelines for how much exercise pups need. But aim for some aerobic exercise every day. Get out the toys for even your older dogs still like to play.

Healthy weight = longevity. There’s great evidence that keeping dogs trim is the single most important thing pet parents can do that leads to an increased life span.

Prevention means a long life. Even if your dog seems in good form, don’t pass on his regular visits to the vet. Make sure he’s up-to-date on all medications and preventative treatments.

Like humans, dogs need to keep their brains active. Take them on walks and explore new places with new smells. Play
games! It might not increase life span, but it sure will improve their quality of life over their life span, which is as important.

CBD is perhaps the greatest advancement in K9 veterinary care to come out in the last 50 years to help dogs live longer, healthier lives! Incorporating a daily CBD oil routine for your dog will help him stay strong, alert and calm during stressful situations.

Overall, whether you use the Rule-of-Seven or the new science based epigentic DNA formula to determine your pup’s age, the fact remains that the canine biological clock ticks much faster initially for dogs than it does for humans.

Until more research becomes available to validate the aging process in our furry four-legged friends, we should keep in mind that all dogs deserve special care at every age & every stage of life.

By following the 5 tips to help your dog live a better Quality of Life and by adding natural CBD oil to your dog’s daily nutritional routine you can help your dog stay youthful, vibrant and full of life so that aging is just a number and even our geriatric senior dogs can still blossom in their senior years! 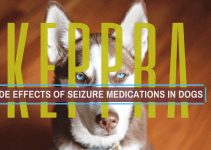