If you’ve ever witnessed a dog in the throws of an epileptic seizure you know the petrified feeling of terror and helplessness as your best buddy endures the spastic convulsions of irratic brain function–And you dread it happening again!

The following information on the causes of canine epilepsy along with new research into natural treatments for epilepsy in dogs is intended to help eliminate your fears and calm your frustration to better help you manage your dogs with epilepsy. 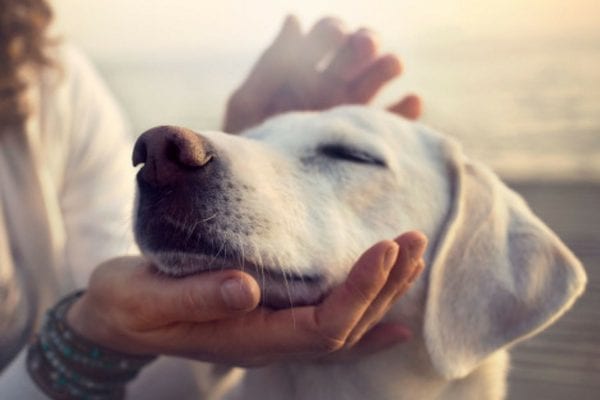 What Is Canine Epilepsy?

Canine Epilepsy is the most common neurological disorder seen in dogs, with an estimated 780,000 dogs being diagnosed with epilepsy each year in the United States; but whether individual patients actually have the disease or suffer from a different neurological condition is somewhat of an open question.

A lack of scientific agreement among epilepsy researchers and treatment professionals regarding the definitions, classifications, and therapeutic outcome measures makes it difficult to draw significant conclusions that can help pet parents understand precisely how to properly care for their dog with seizure symptoms.

The term epilepsy refers to ‘a heterogeneous disease that is characterized by the presence of recurrent, unprovoked seizures resulting from an abnormality of the brain’. Heterogenous is a fancy way of saying epilepsy is a medical condition which potentially has several causes or etiologies, like hepatitis or diabetes.

The specific biochemical mechanisms that cause seizures in dogs are not yet fully understood, although seizures are known to result from dysfunction in the brain’s electrical activity. It is generally believed that epileptic seizures are caused by an imbalance between excitatory and inhibitory activity in specific areas of the brain, leading to either excessive brain activity or activity that is unusually depressed.

Canine genetics can have a significant impact on the inherited traits of epilepsy in certain breeds such as German Shepherds (GSD) and Siberian Huskies but can affect dogs of pure- and mixed breeds as well. 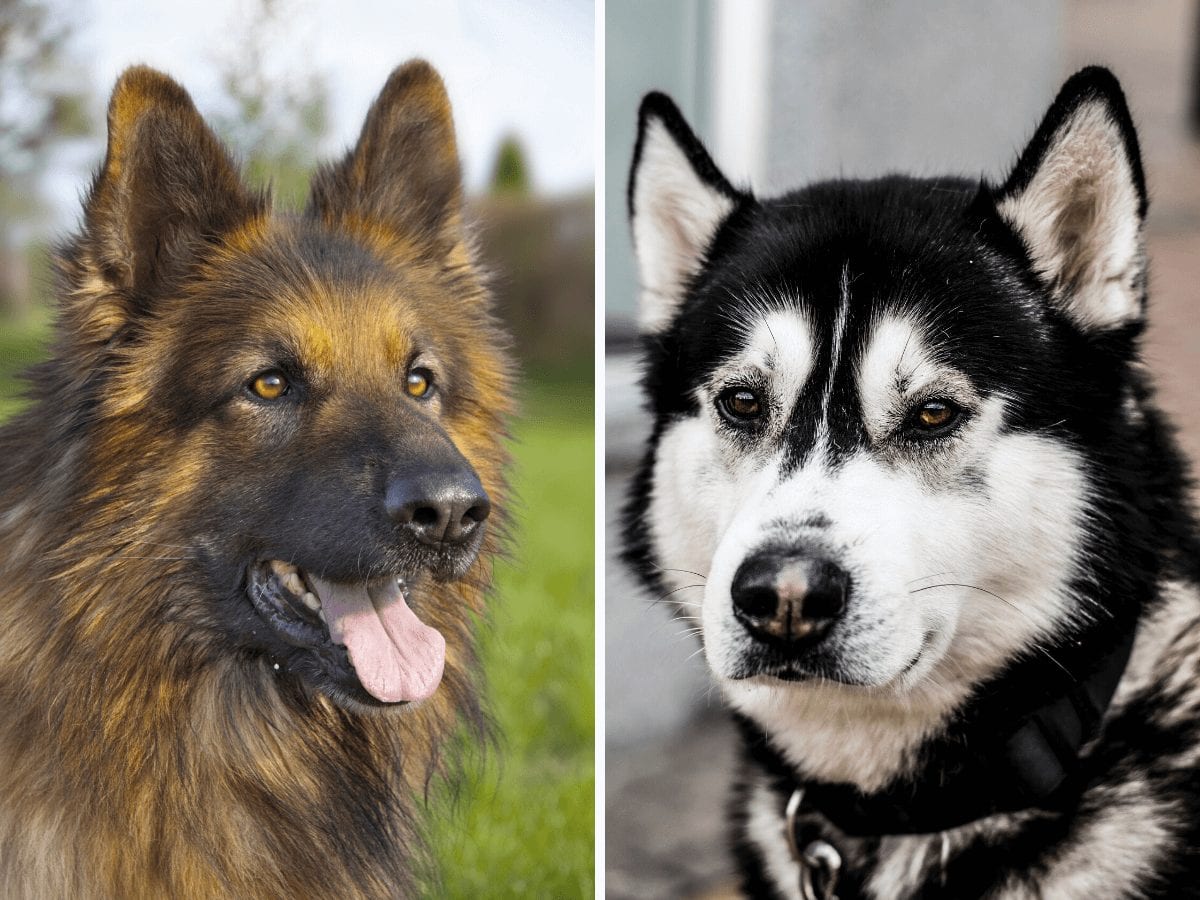 Epilepsy can be inherited in dog breeds such as German Shepherds (GSD) and Siberian Huskies.

One study of the incidence rates of epilepsy in dogs demonstrated marked breed differences in incidence and mortality rates–which are assumed to reflect a genetic pre-disposition to epilepsy and seizures.

The inheritance of epilepsy in dogs is a complex interplay between gene expression and environmnetal factors. A large number of genetic mutations have been associated with epilepsy in both humans and animals.

However, the extent of ‘inbreeding’ within specific dog breeds has allowed the identification of certain animals that are at particularly high risk of seizure development. At present, 26 dog breeds have shown at least some evidence of heritable epilepsies.

Specifically, one gene for an inherited epilepsy has been identified in Lagotto Romagnolo dogs. That gene, LGI2, is similar to the previously identified human epilepsy gene LGI1, and scientists believe that a number of heritable epilepsies may have similar causes in humans and canines.

Research into potential similarities between dog and human epilepsies has also led to the identification of several candidate genes that may predict the effectiveness of anti-epileptic (AE) drug treatment in some breeds.

Treatment for Canine Epilepsy and improvements in long-term care are desperately needed, especially for dogs with drug-resistant epilepsy or where side effects of currently available drugs are not well tolerated. Researchers continue to investigate the causes of canine epilepsies, both inherited and acquired, along with new therapies to more safely and effectively treat canine seizures.

Despite the use of traditional canine epilepsy drugs like Phenobarbital and Potassium bromide, many dogs’ seizures remain uncontrolled using currently available therapies. Even with medication, up to 30 percent of dogs with epilepsy continue to experience uncontrolled seizures.

Many canine patients experience adverse side effects of these medications, including sedation, ataxia, and increased appetite and water consumption. Dogs can also develop tolerance to phenobarbital over time, and are susceptible to withdrawal effects as physical dependence can develop. 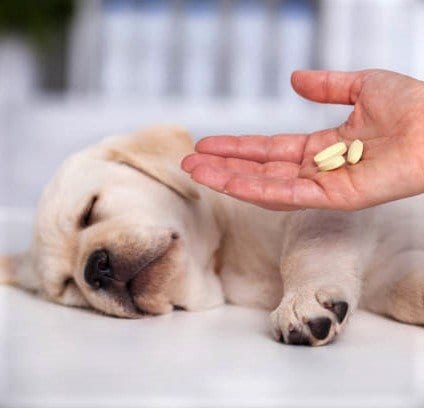 Traditional veterinary therapy drugs may not be effective control for the majority of dogs with epilepsy.

Pet parents of severe seizure sufferers frequently feel over-whelmed and frustrated with the adverse effects of AE drugs on the Quality of Life for their K9 companion–many choosing euthanasia as the last-ditch alternative.

But new research on an ancient botanical medicine is encouraging and may be the answer for pet parents of dogs afflicted with epilepsy.

A Natural Treatment Alternative For Dogs With Epilepsy

Although the correct determination of an appropriate treatment regimen for canine epilepsy depends on an accurate diagnosis of the type and cause of seizures (epileptogenesis), there is a canine epilepsy treatment option available for dog owners who want a more natural, holistic means to help calm their K9’s seizures.

Research on the potential health benefits of CBD in dogs is beginning to emerge. Current research suggests that Cannabidiol (CBD) from hemp has low toxicity and high tolerability in humans and non-humans and shows promise in the attenuation of seizure activity in dogs.

Existing studies show its potential as a single therapy for pain reduction in osteoarthritic dogs or as an adjunct therapy for the reduction in seizure frequency in dogs with idiopathic epilepsy.

Findings provide support for continuing research on CBD’s safety profile and potential therapeutic uses in dogs so that it may be considered a treatment option in veterinary medicine.

Is CBD Safe For Canine Epilepsy?

Cannabidiol (CBD) from hemp is a major NON-psychoactive phytocannabinoid with therapeutic properties for numerous canine disorders that’s exerted through molecular mechanisms that are yet to be completely identified but are understood to function through the interactions with the Endocannabinoid System in the dog’s brain and body.

CBD acts in some experimental models as an anti-inflammatory, anticonvulsant, anti-oxidant, anti-emetic, anxiolytic and antipsychotic agent, and is therefore a potential medicine as a natural treatment of neuroinflammation, oxidative injury and Canine Epilepsy.

A major clinical trial to study the use of cannabidiol to treat drug resistant epilepsy in dogs was led by Stephanie McGrath, MS, DVM, DACVIM (Neurology), at Colorado State University’s College of Veterinary Medicine and Biomedical Sciences.

Known as the “Efficacy of Cannabidiol (CBD) for the Treatment of Canine Epilepsy”, Dr. McGrath intended to determine if CBD is effective for treating epilepsy in dogs and measure the potential adverse side-effects (AE) of CBD as an anti-convulsive medication.

She studied 16 dogs with greater than 2 seizures a month and found that using a full-spectrum CBD extract in a carrier oil of MCT oil showed positive clinical results with a statistically significant reduction in the FREQUENCY of canine seizures.

In addition to the study’s positive conclusions of using CBD to treat canine epilepsy, there were ‘zero adverse side effects’ from CBD therapy–even when combining CBD and anti-convulsive therapy drugs like Keppra for the management of canine epilepsy.

Canine idiopathic epilepsy, with recurrent seizures, has no known or identifiable underlying cause, remains a common concern of dog owners and veterinary professionals. CBD may be a medical alternative to ineffective seizure therapies in cases where there is no dissernable cause for canine epilepsy or there is TRE (treatment-resistent-epilepsy).

Is CBD Oil Good For Dogs With Epilepsy?

Canine idiopathic epilepsy, with recurrent seizures and no identifiable underlying cause, remains a common concern of dog owners and veterinary professionals. The scope of the study at CSU proved the efficacy of plant-based, full-spectrum cannabinoid therapy for dogs with uncontrolled epilepsy. These results extend the anti-convulsant profile of CBD to help dogs with a range of epilepsies.

When combined with a reported absence of negative side-effects, the current evidence strongly supports CBD as a therapeutic candidate for a diverse range of epilepsies in our four-legged friends.

*The information provided above is for information purposes only and cannot replace the advice of your veterinarian. Do not give your dog any medications without advice from a board-certified, licensed veterinarian. 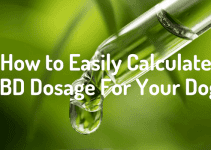